Mrs S as she imagines herself.

Mrs S finds most things involving young children to be inconvenient, which is unfortunate, as she has three: a son, aged six, and two daughters, aged four and two. And if GK Chesterton is to be believed, this outlook makes her a grouchy old crank of a pessimist who is the author of her own misery. Mrs S has the ambition to be the author of many things, but her own misery is not one of them. So this blog is a challenge to herself to heed the words of wise old GKC and try to wring some joy, humour, insight, and, indeed, adventure from the staggering dullness of domesticity.

Mrs S, as she doubtless appears to others: rather fluffy and blocking the road with her little lambs in tow.

Of course, as Mrs S is the author as well as the subject of Adventures, Considered you may well wonder why it is often written in the third person. ‘What a weird, arrogant woman,’ you might think uncharitably. So let me explain, as myself, why the blog is set up as it is. There are two reasons for writing in the third person, as though penning a work of fiction. The first is that I have noticed that omniscient narrators are wiser than the characters they narrate, so this seems the more desirable role if one can have it. The second reason is more pragmatic: I struggle to write in any other way. Of course, I can write in the first person. I can write theoretical papers. I spent ten years in academic philosophy, after all (mostly being told I am a better writer than a philosopher). But when I am not writing stories I spend a lot of time staring at the page or the screen. I have plenty to say in any voice, but no matter how well I know the subject, the transmission from head to essay is tedious. Give me a few characters, however, and the scenes seem to write themselves. So this is how I’m going to write the blog. I do not have spare time to stare at the screen. I have children and a husband to feed and clothe, a house to clean, and a novel to write.

I am placing no limits on the subject matter of these stories. I’m sure the family will feature quite prominently (pseudonymously, of course: no need to cause unnecessary social discomfort), as will matters of faith, philosophy, science and literature, but not in a very highbrow or academic way. 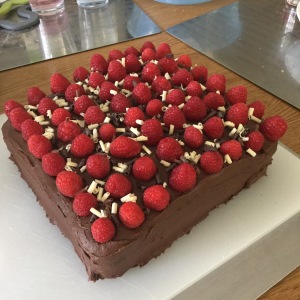 Food is also likely to be a frequent topic, as cooking is the only domestic activity I do with any skill, and, frankly, I like to eat.  This will undoubtably lead to mention of weight-loss efforts, which I will endeavour to keep to a minimum. As an American living in England, I am sure I will not be able to resist pointing out cultural differences, and complaining about the confused effect this relocation has had on my spelling. So you may expect a little of this, and a bit of that, in narrative form, told with an eye for the absurd, an ironic edge, and an optimistic search for adventure in the everyday life of a homemaker and writer.

It would be easy to have an adventure someplace like this. It’s a bit trickier in the suburbs.

I hope you enjoy reading about the adventures of Mrs S and her brood. (Indeed, I hope these tales do turn out adventurous. If Chesterton is wrong then Adventures, Considered will be merely the grim journal of a woman who is forever loading and unloading the dishwasher.) Be assured that whilst the stories are written in the style of fiction, the contents are true, notwithstanding a tweak here and there for narrative flow and impact. I am not a journalist, but I am generally reliable. 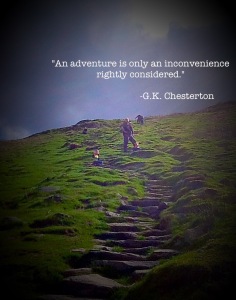 Correspondence may be directed to adventuresconsidered at gmail dot com.

Thinking with the Church

A Monk on the Mission

A quarterly journal of ideas, art, and faith

Blog of a Country Priest
The Catholic Thing

I Have to Sit Down

Listening in the Desert

I'm totally dependent on You, Father.

The Art and Craft of Blogging

The latest news on WordPress.com and the WordPress community.