Mrs S has spent the week in a state of acute literary frustration. The novel wasn’t working so she spent a couple days writing embarassingly unironic smut about beautiful people with slightly tragic pasts. It seemed to lack a plot, so she set part of it in Zurich, and threw in a few arms dealers in a peripheral kind of way. It was only marginally better than E L James’ best efforts, or so she hears, but in her defence Mrs S didn’t try to dress up violence as romance, relying instead on clichéd sentimentality. Then she pulled herself together, put away the purple notebook (the height of Mrs S’s organisational ability is that she keeps a purple notebook for purple prose) and tried to address the plot and sequencing issues that are hobbling her more serious writing. Meanwhile, she realised that she hadn’t considered any adventures recently, and sat down to blog.

The background sound to all of this activity was the older children’s indescribably boring school-supplied reading books, and so she tried to write a humorous piece about how the schools were destroying children’s capacity to love the written word. But it turned out as joyless and turgid as the books she was condemning, and she could not bring herself to click “publish.”

The problem this week is that the words were no fun anymore. There was  no beauty, no joy, no play. It reminded her, as things sometimes do, of a passage from T S Eliot’s Ash Wednesday:

Because these wings are no longer wings to fly

But merely vans to beat the air

The air which is now thoroughly small and dry

Smaller and dryer than the will

Teach us to care and not to care

Teach us to sit still.

Lovely verse. Eliot, though apparently serious to his deliberately-English core, knew how to play with words, and this is why he is a joy to read. He is good to read for many other edifying reasons, but it is the turn of phrase that makes the heart to flutter and leap upwards. The children are not equipped for deep analysis of The Love Song of J Alfred Prufrock, but they shrieked with laughter when she read to them “I grow old… I grow old… I shall wear the bottoms of my trousers rolled.” They were delighted with the image of “The yellow fog that rubs its back upon the window-panes.”

Getting back to playing with words seemed to be the key to undoing all the angst of the week. Mrs S would never claim that poetry is the one and only means to impart a love of language, or that one must read poetry to one’s children or they will never learn to love to read. (It doesn’t work on all kids. Some respond to non-fiction, some to adventure, some to fantasy, some to sports-type stuff.) Nor would Mrs S claim that a bit of verse cures all authorial ills, but tonight Mrs S read one of their favourite poems to the children, and they said parts of it along with her, so she knew it had made more of an impression than the horrible school books. And she felt much better and wrote much better afterwards. So, if you too have any lexicographical blues, or if you have a poetry-susceptible child, Mrs S recommends The Puffin Poem, by Florence Page Jacques:

Oh, there once was a Puffin

Just the shape of a muffin,

And he lived on an island

In the bright blue sea!
He ate little fishes,

That were most delicious,

And he had them for supper

And he had them for tea.
But this poor little Puffin,

For he hadn’t anybody

To play with at all.
So he sat on his island,

And he cried for awhile, and

And he felt very small.
Then along came the fishes,

And they said, “If you wishes,

You can have us for playmates,

Instead of for tea!”
So they now play together,

In all sorts of weather,

And the Puffin eats pancakes, 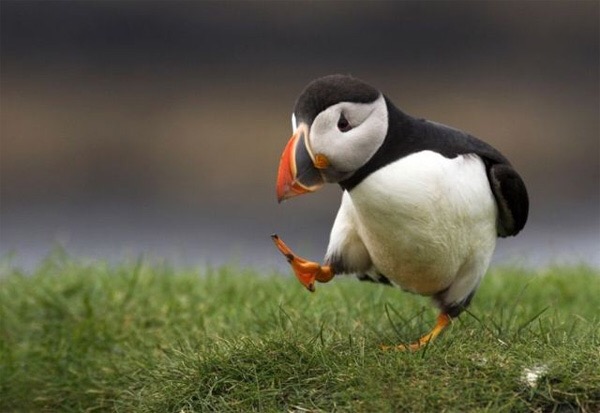 Thinking with the Church

A Monk on the Mission

A quarterly journal of ideas, art, and faith

Blog of a Country Priest
The Catholic Thing

I Have to Sit Down

Listening in the Desert

I'm totally dependent on You, Father.

The Art and Craft of Blogging

The latest news on WordPress.com and the WordPress community.